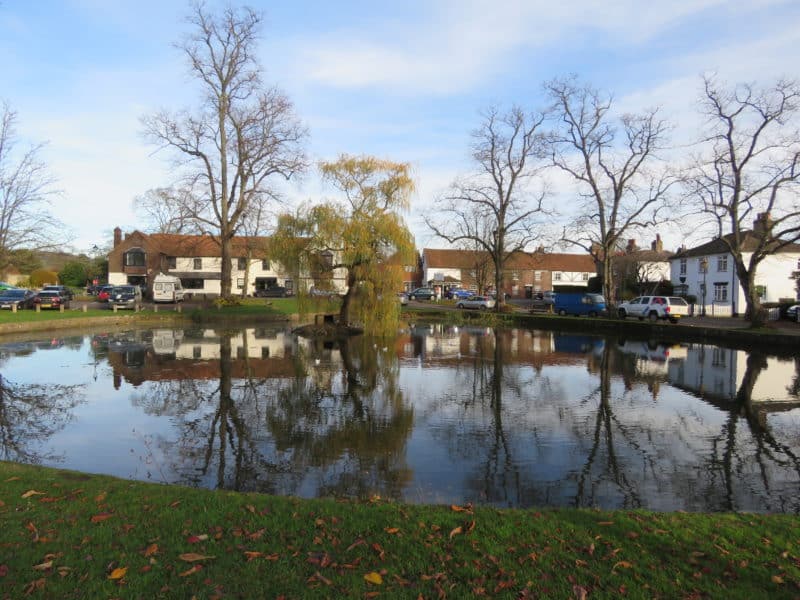 Thirty members of the Society explored Godstone and Tilburstow Hill in the east of the County on a frosty February morning. Although we could see the M25 Motorway in the distance on our walk, the area is incredibly beautiful and rural.

Starting on the green in Godstone we originally explored the series of lakes developed by the Evelyn family in 1588 for their gunpowder mills. The area is now known as Bay Pond and is a nature reserve managed by Surrey Wildlife Trust. We then ascended the steep Tilburstow Hill and explored the Greensand Way, with several outstanding panoramic views along the way.

The area is extremely historic and is mentioned in the 1086 Domesday Book. It was owned by King Ethelred and was passed to his daughter Goda upon her marriage and became known as “Goda’s Place”. Goda died in 1055.

Godstone is built on a stretch of the Brighton Way Roman Road, which comes through the high Caterham Gap, and continues southward along Tilburstow Hill Road.

The village was also a famous historic coach stop with The Bell Inn dating from 1393. The White Hart and the Hare and Hounds date from 1500s. Several members very sensibly reserved tables in advance of the walk as the pubs here are incredibly popular and it is impossible to get a table on spec on the day. There are also several really nice cafes which our members sampled both before and after our walk.