Exploring the River Wey around Godalming

On the 7th August 2022 we held our usual Sunday free walk of the month around the outskirts of Godalming. There was a lot to see on this relatively short walk. We met at the Beefeater car-park on the main road between Guildford to Godalming which was the site of the largest tannery in the area. The main industry around the area was in fact wool with the local mills using large mechanical hammers to pulp the wool. The river Wey joins the Thames at Weybridge and then the barges could travel with their various cargos up and into London.

A short walk towards Godalming we came upon 10 Almshouses which were the brainchild of Richard Wyatt who was a wealthy business merchant in Dunsfold. The stipulated that none of the tenants should be drunkards, swear or blaspheme and that every Sunday they would attend the local church in Godalming to hear prayers.

Catteshall Lock, a little further into our walk, is the first lock on the Godalming Navigation. To the left of the river are the ancient Lammas Lands which are historic common land and floodplain. It is still used as common land today with people bringing their cattle and horses to the fields to graze. 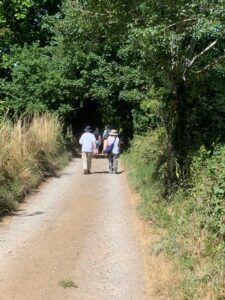 The flood defences at the far end of the field were completed in October 2019 at a cost of £4.5M. All the houses which were on the same level as the flood plains would flood and the water would come up through their floors. On at least one occasion the river levels ere so high that the main road between Godalming and Guildford was impassable. They have installed a pumping station which can pump 84 litres per second into a small stream in front of the barrier called hells ditch.

Catteshall Mill which was further into our walk is listed in the Domesday book and used to house the largest Fourneyron enclosed turbine ever built. He was the first maker of hydropower turbines and these were used to replace the water wheels.

Towards the halfway point of our walk we came upon The Ram Cider House which was built in the 16th Century and people came from miles around to sample some of their 35 different types of ciders. Unfortunately it is now a private dwelling. 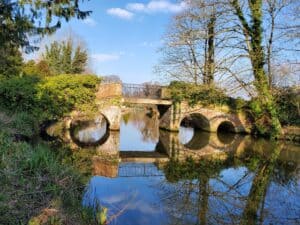 Crossing back over the river we used Trowers Footbridge which was probably the entrance to Unstead Park. It was bought at auction in 1873 for around £37,5000.00. It had electricity installed in 1912 but its water was obtained from a hydraulic ram gravity pump near the Cider house and this was piped up the hill to the estates own reservoir and hence the pub got it’s name The Ram Cider House.

We ended up walking around broadwater lake which is owned by Godalming Angling Society and covers around 10 acres. It is well stocked with carp, rudd and perch weighing up to 30 pounds. On hot days they come to the surface and we watched as a family fed them like tame ducks.

We then participated in some very welcome and delicious waffles and coffee before strolling back along the lake to the start of the walk. 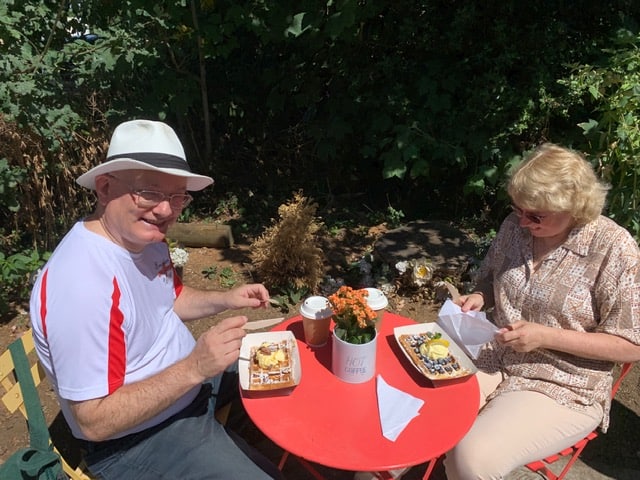 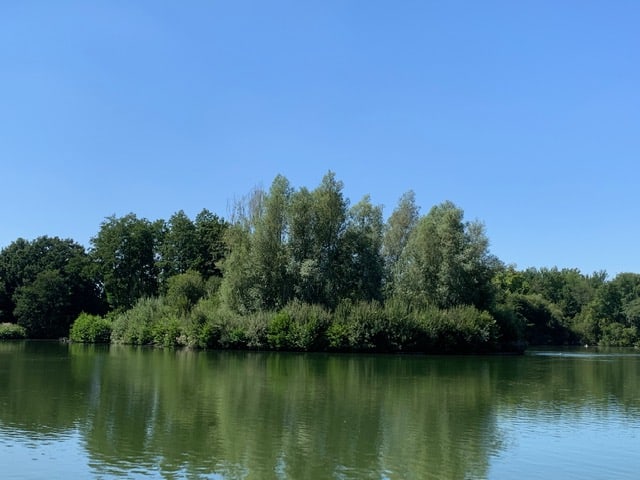