From Quarry to Recreation Space 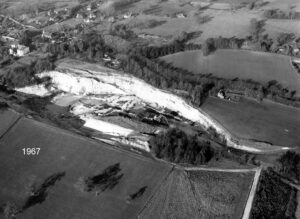 The UK quarrying industry is one of the oldest industries in the country and for hundreds of years was an integral part of our industrial heritage. Several formerly active quarries in Surrey have now been transformed into conservation areas and recreational facilities.

Tice’s Meadow Nature Reserve, a 150 acre site near Farnham and former quarry, has recently come under the ownership of Surrey County Council with funding support from several other councils. Designated a Site of Nature Conservation Interest (SNCI), it is one of the best bird watching sites in Surrey. 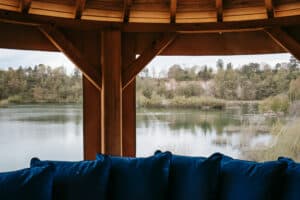 While the old chalk quarry and lime kilns at Betchworth ceased production in the 1960s and is now a stunning chalk grassland site rich in flora managed by the Surrey Wildlife Trust. Nearby Buckland Park Lake, a 100-acre site between Reigate and Dorking, is an interesting case study of major quarry transformation.

A fascinating conversation with Dominic Sanders, Managing Director at Buckland Estate, which owns Buckland Park Lake, highlighted the challenges in transforming what was a major supplier to the national glass sand market into a wonderful outdoor recreational space. 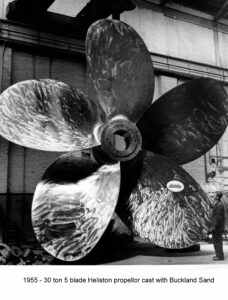 The “Folkestone beds” along the foot of the North Downs contain some of the purest silica sand deposits in the country. Its low metal content makes it useful in a range of industries including glass and foundry casting. At its peak Buckland Sand & Silica Co. Ltd, owned by the Sanders family since 1925, had up to 15% of the national sand market. The sand had interesting uses from casting the propellers of the Queen Mary through to the moonscapes on the set of Stanley Kubrick’s 2001 A Space Odyssey.

Dominic explained why the change of use. “The advent of plastic bottles and the offshoring of much of the foundry industry put the demand for silica sand into gradual decline.” Quarrying ceased at Buckland Park Lake in the late 1980s, although it served as the processing plant for sand extracted from nearby Tapwood until 2014.

A decision had to be made about the Buckland site’s future use. The size and easy access to the A25 offered various opportunities, but of course a key issue was planning consent within the green belt. As quarries are tempting but highly dangerous places to swim, supervised swimming was one option. In 2018 the planners agreed to provide access to the public, including water sports, refreshments and other facilities. The development, like many others, was hindered by Covid and finally opened in May 2021. Our Society’s Chairman’s day brought it to the attention of many of our members in July 2021. 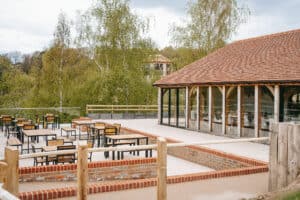 There are plenty of ongoing challenges. “Higher footfall means a better return on the large investment, but overcrowding would spoil the ambience,” said Dominic. Do they think they have succeeded? “Overall, we are very pleased with the results. Although we have had far more visitors than we expected we believe we have been successful in not overcrowding the site. However, we are trying to remain honest about how much lies ahead and what we must do to achieve the standards to which we aspire for our visitors.” And what about Tapwood on the other side of the A25? According to Dominic it is unlikely it will ever be suitable for general public enjoyment due to its topography and location.