Glassmaking in the Surrey Hills

It’s always intriguing to discover how and why certain industries rose to prominence in a particular area, such as glassmaking in Chiddingfold. During the reign of Elizabeth I there were already around 11 glassmakers on Chiddingfold Green, all benefitting from the local geology; the ground being exceptionally sandy while local woodlands provided plenty of firewood for the furnaces.

The industry was however still small scale in the 1500s, it took an influx of Huguenot refugees for it to take off in a big way. Huguenot glassmakers brought with them new technologies and techniques including the production of coloured glass. One refugee, Jean Carre, was determined to make window glass in the Weald. It was only once he received a licence from Queen Elizabeth I to produce glass for glazing similar to that made in France that the industry flourished.

What then caused its decline? Firstly, local inhabitants complained that the furnaces were causing a nuisance, though this was possibly more about the unpopularity of the foreigners who owned the furnaces than the industry itself. Secondly, in 1615 King James I prohibited the burning of wood for glassmaking as it was uneconomical and the wood could be used more profitably in other industries. However, this was not before Chiddingfold glass was used in famous buildings such as St Stephen’s Chapel in Westminster and St George’s Chapel in Windsor.

Not surprisingly, the tradition in glass has continued to this day though in different forms. One local artist, Rachel Mulligan is based near Godalming specialising in stained glass and runs classes as well as producing artworks for exhibitions and working to commission. 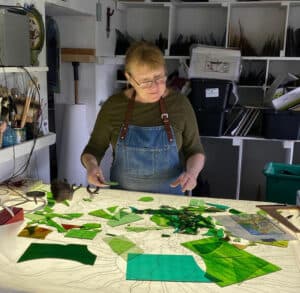 Another, Amanda Blair, works from her garden studio using blown sheet glass and other flat glass to create stained glass windows for ecclesiastical and secular settings. Her current project is to create a large rose window for All Saints Church in Fleet. She has also just relaunched her ever popular classes following a 2 year break. 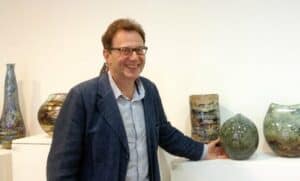 Perhaps one of the most well-known is Adam Aaronson considered one of the UK’s leading glass artists.  At his studio in West Horsley, he specialises in free-blown glass, runs beginners’ courses in glassblowing and designs and makes a range of interior design accessories. Visitors to the studio are welcome Tuesday through Sunday.

Given that many of these artists run specialist courses in glassmaking hopefully this wonderful art form will be very much kept alive and enjoyed by future generations.