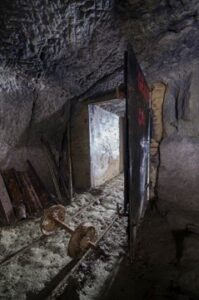 Godstone is a delightful village with links back to Ethelred the Unready. Underneath the North Downs is Godstone mine, also referred to as Godstone Caves. In the 17th century mining began and the flintstone that was extracted was used for buildings and furnaces because of its extremely fire-resistant properties. It gained the name firestone from its unusual qualities. During the Industrial Revolution flintstone became recognised as a prime material for construction and the mine was expanded. One of the mine’s advantages was its close proximity to the railway and London. Some of London’s oldest buildings contain stone mined at Godstone. 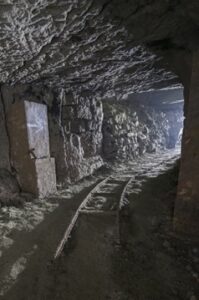 The mine is made up of 5 different networks, the Roman Road Series, Main Series, Sawmills, Whitefield Quarry and Jones, but these were eventually made into one which became known as the main series over the course of the 18th century. Together they comprise 7 miles of tunnels. Marks on the walls were carved out by the yokes of oxen dragging carts around the mines and in the 19th century metal tracks were laid down as the process became industrialised.

The quarries provided a useful income for their owners, the Clayton family, but when more durable stones were found further afield firestone lost some of its market value. However, the mine continued to be worked and hearthstone was uncovered. This is a soft sandstone. In the mid 19th century fashion changed and people wanted to whiten their doorsteps, window ledges and hearths and used the hearthstone to do this as it left a white deposit once dried. Godstone mine supplied many hundreds of thousands of tons of hearthstone to retailers, many of whom were in London.

As hearthstone continued to be mined in the east of the county in the early 20th century, at Godstone some parts of the mine were completely altered and subsequently used for growing mushrooms by French mushroom growers. Compost was laid out in long piles called ridge beds, the walls were painted with limewash to disinfect the mines and doors and barriers were put in place to control the ventilation. The humidity needed to be carefully controlled and pipes were installed to distribute water to the various parts of the mines to keep the mushrooms in perfect growing condition.

In between the great wars the mines became derelict with parts of the mines used for storage and an unofficial air raid shelter during WW2. The Home Office was aware of the existence of the caves which being 80 to 200 feet below the surface, covered with trees above ground providing natural camouflage against air attack and containing natural springs for drinking water made ideal air raid shelters. It appears however that, for whatever reason, the mines were not authorised by the government for use by Londoners but locals certainly took advantage of them as a shelter during WW2. 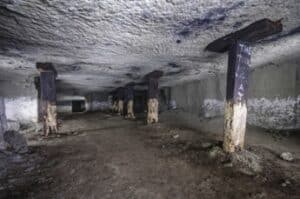 The mine is now owned by the Wealden Cave & Mine Society and they very occasionally allow guided tours of the cave network. There are also plans to restore some of the network that has collapsed.