Greening Communities in the Surrey Hills

Concern over climate change is inspiring dramatic changes in thinking all around the world and that includes many in the Surrey Hills too.

In my own village of Shamley Green, we decided to form an environment group in January 2019. Despite the pandemic the group has gone from strength to strength.  There were two urgent tasks. The first was to find more volunteers for the toad patrols that happen in February and March. Toads like to make their way back to the pond of their birth to breed at this time – just around dusk. Unfortunately this coincides with the evening rush hour and has resulted in many toads being killed. 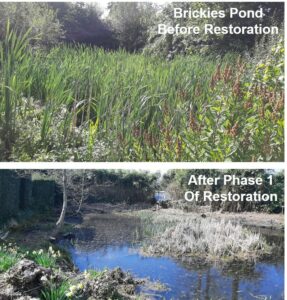 The second urgent job was to do something about our village ponds.  One had become so overgrown with an invasive weed (crassula helmsii), that the ducks were now standing on the pond – not in it!  We also have a second pond which was completely choked by reed mace.

But where to start? We were just all enthusiastic amateurs.  We contacted the Surrey Amphibian and Reptile Group who recommended that we started with an environmental audit. The parish council agreed to pay for this at their March meeting and by April we had an expert out surveying our ponds and creating a report. A ponds working group was formed. Our challenge, however, was that everyone had a slightly different idea as to the purpose of the two ponds and it appears that ducks and amphibians are not great neighbours.  The consensus eventually was that we would manage one pond for wildlife and the other pond for ducks and humans. 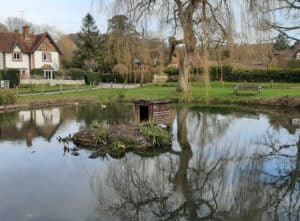 Once the project brief regarding the ponds had been agreed, a generous villager came forward and offered to pay for the expensive task of removing the crassula and the reed mace in the autumn of 2020.

Another group was formed to work with the parish council to change the way we mowed our commons, as we wanted to increase biodiversity through the creation of wildflower meadows. It also had implications for the frogs and toads who need the long grass for protection and green corridors to move away from the ponds after breeding. Some residents felt that the long grass would look unkempt and so began a detailed consultation with all the villagers to agree where we would mow and where we would not. 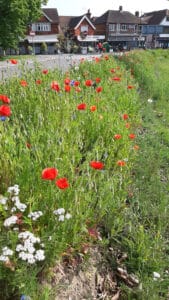 One of our members turned out to be a very knowledgeable landscape designer. She organised, as part of her company’s training scheme, to bring Prof James Titchmough, the famous designer of the wildflower meadows at the Olympic Park, to spend the day with us. After spending the morning with her team, she generously donated the rest of his day to meet with our volunteers and give us advice on how to manage our commons more sustainably.

We now have groups focussing on birds and trees, whilst another group is working with our local schools. It has been really surprising how easy it has been to get these projects started and we seem to have lots of support from the borough council and our parish council. I know there are quite a number of other environment groups across the Surrey Hills, so do think about getting involved in one local to you. I have found these environmental initiatives very rewarding and have also met some really interesting new people in my village.