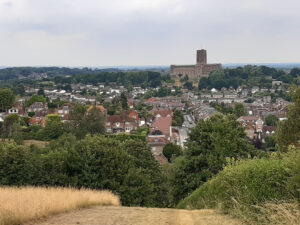 In a grassy corner at the top of The Mount overlooking Guildford is a memorial stone. It is called the “Kernow Stone” – but why is it there and what is the background to its name?

The story begins in 1496. After disagreements regarding new regulations for the tin-mining industry, King Henry VII suspended the operation and privileges of the Cornish stannaries, a major part of the county’s economy. These privileges, which included exemption from certain royal and local taxes, had been granted under a deal with Edward I in 1305. With Scotland threatening to invade England the King levied an extraordinary series of financial demands on his subjects, a burden which fell more heavily on Cornwall than most areas.

The people of Cornwall were incited into armed revolt with the supposed aim of removing the two servants of the king considered responsible for his taxation policies, Cardinal John Morton and Sir Reginald Bray.

An army some 15,000 strong marched towards Devon, attracting support in the form of provisions and recruits as they went. In Devon support for the rebellion was far lower than in Cornwall. Entering Somerset, however, they were joined by James Touchet, the seventh Baron Audley who as a member of the nobility with military experience was gladly received and acclaimed as their leader. The rebels continued towards London, marching via Salisbury and Winchester.

When the King learned of the close approach of the West Country rebels to London, and of their strength, he diverted his main army of 8,000 men under Lord Daubeny to meet them. Daubeny’s army camped on Hounslow Heath on 13 June and the next day a detachment of 500 of his spearmen clashed with the rebels near Guildford. Until then, the rebel army had met virtually no armed opposition, but neither had they gained significant numbers of new recruits since passing through Somerset.

Instead of approaching London directly they skirted to the south believing they would gain popular support from Kent. Leaving Guildford they moved via Banstead to Blackheath, an area of high ground south-east of London, which they reached on 16 June. No Kentish uprising materialised. Indeed, forces of Kentish men had been mobilised against them under loyalist nobles. The King had now mustered a large army in London so the outlook for the rebels was grim. There was much dismay and disunity among the rebels on Blackheath and thousands of desertions from the insurgency that night.

The Battle of Deptford Bridge (also known as Battle of Blackheath) took place on 17 June 1497. The King’s forces were deployed to surround the Blackheath high ground where the rebel army had camped and where its greater part was still positioned. Lord Daubeny attacked along the main road from London, crossing Deptford Bridge and taking it from the rebels. He then led the attack up into the rebels’ main position on the heath. So bold was his leadership that he became separated, surrounded by the enemy, and temporarily captured. The rebels could have killed him, but actually let him go unhurt. Overwhelmingly outnumbered, surrounded, poorly trained and equipped and lacking cavalry, their fight was now hopeless. They were routed. Their leaders were captured and subsequently executed. A visit to this memorial is included in a Guildford Walkfest event being hosted by Surrey Hills Society on Friday 16th September. Details are on the SHS website “Events” page and on the Walkfest website www.guildfordwalkfest.co.uk  Why not join us to see the stone for yourself?