Surrey Hills Society has a new member and mascot!

Haslemere is running a local community arts project which also acts as a fundraiser called Haslemere Hares.  This will see over 80 decorated hares displayed around the town and surrounding area throughout the summer.

As part of the Surrey Hills Society’s anniversary celebrations, we have sponsored a hare and had it decorated by one of our volunteers – Charlotte Choi.

Although not officially launched until mid-May, out hare has just had an evening out when it made a guest appearance at a talk on the Surrey Hills given to Haslemere Civic Society. The hare loved all the attention given to it by the audience – who also enjoyed the talk given by Ken Bare (our vice Chairman).

Officially known as the Surrey Hills Hare, we are inviting the public to vote for a ‘pet name’ for it. If you would like to vote, please see the Surrey Hills Facebook page and check the entry dated 21s April here. 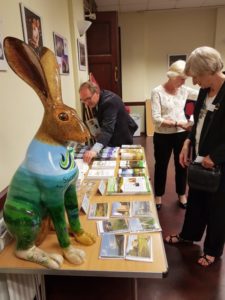