Surrey Locations for TV and Film

Surrey has been a renowned film location for well over fifty years. One of the earliest blockbusters filmed partly in Surrey was Lawrence of Arabia back in 1962, where Peter O’Toole falling from his motorbike was shot at Chobham Common. 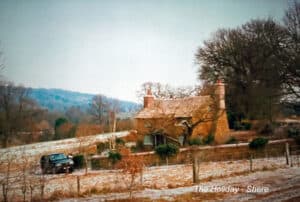 While two of the most often quoted films are Four Weddings and a Funeral and The Holiday, there are a whole raft of TV and film productions that have taken place in Surrey since then and it isn’t hard to understand why. Firstly, its location: Surrey is home to two high-end studios (Shepperton and more recently Longcross) and is close to London as well as Heathrow and Gatwick airports. Secondly, the wonderfully diverse scenery makes the area a perfect stand-in location for many other parts of the country and beyond.

In The Dig, the film about the discovery of Sutton Hoo in Suffolk, Norney Grange in Shackleford, was chosen as Edith Pretty’s home, while Loseley Park near Guildford doubled as Broadlands in Hampshire for recent episodes of The Crown. Netflix’s Bridgerton was filmed partly at Painshill Park and features the 18th century gardens and lake, while Leith Hill Place was transformed to the mother house of the nun’s order in Call the Midwife, even though the series is set in Sussex. Ironically, the famous picnic scene on Box Hill in Jane Austen’s Emma wasn’t filmed there at all, but at nearby Leith Hill. 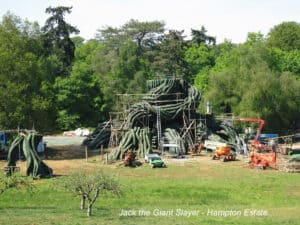 Hankley Common was used for several Bond blockbusters including Skyfall and represented a French battlefield In the epic film 1917. More recently, it is rumoured to be the site for a Netflix production The Sandman. Visitors to Frensham Ponds may also have spotted a Celtic village taking shape for another upcoming Netflix production, The Cursed which also has the romantic remains of Waverley Abbey near Farnham, transformed into a ruined castle. Meanwhile, during last summer, filming of the remake of an Agatha Christie novel, Why Didn’t They Ask Evans?, directed by Hugh Laurie and with a star-studded cast, took place at a number of Surrey locations, including Guildford, Mickleham and Shere.

Elsewhere, a scene for a romantic comedy What’s Love Got to Do With It? starring Lily James and Emma Thompson reportedly took place at Ashcombe School in Dorking. Another school enjoying fame earlier in 2021 was Betchworth Primary School which along with Flanchford Farm near Reigate became one of the Surrey based locations for The Larkins. 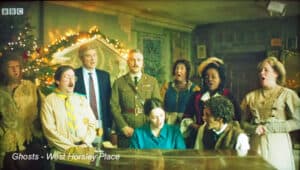 Finally a mention must be given to West Horsley Place. The 15th century manor house has become the go-to location for a range of television and film productions. One example is the popular Ghosts which was filmed there almost in its entirety – with proceeds from filming contributing to the major restoration programme.

With film production making up for lost time during the pandemic, Netflix significantly increasing activity in the UK, the expansion of both Shepperton and Longcross studios, and the support of the Surrey Film Office, an economic development initiative by Surrey County Council, it seems that the Surrey Hills can only continue as one of England’s prime filming hotspots.