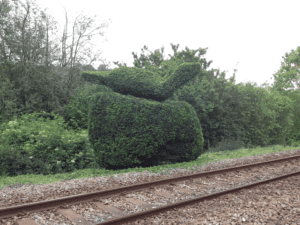 Many people will have heard of the Dorking Cockerel but few will have any knowledge of the “Chilworth Chicken”.

This is the affectionate nickname given to a piece of topiary beside the North Downs railway line and which forms a moving memorial to a train guard who lost his life in a tragic incident over 130 years ago.

On Monday 29 February 1892 – a leap year – a goods train travelling from Redhill to Reading crashed at about 10:40pm, throwing the guard, Henry Wicks, to his death. The train, led by two locomotives, had come apart because of a broken goods wagon coupling.

The front portion of the train continued down the gradient and was eventually stopped by the two locomotives. The rear wagons caught up and collided with the front section between Gomshall and Chilworth. The impact threw 30 wagons down the embankment and derailed the vehicle’s front nine wagons and the second locomotive.

Henry, age 52, was found at first light lying on the embankment. He had worked on the railway for 30 years and left behind his wife, a son and daughter-in-law, Jessie Wicks. Jessie was especially upset by the loss of her father-in-law, and was instrumental in the planting of his lineside memorial and asking railway workers to care for it. 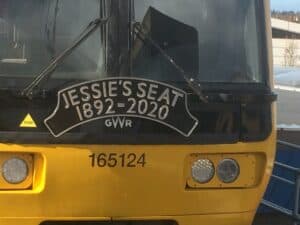 Rather than a chicken, the topiary is pheasant-shaped. It sits on a wide chair, symbolising Henry’s peace, and is also known as Jessie’s Seat. Former railway operators maintained it until 1989 and, since then, volunteers have looked after it.

The “Chilworth Chicken” is still there but blink and you’ll miss it! Unfortunately, it’s not accessible from a public route and sits very close to the track. However, to keep the memory alive, a special memorial train was run on the anniversary in 2020. There are now plans to place a poster cabinet at Chilworth Station to explain the story, along with a replica of the train headboard used on the commemoration event.