At the end of July, the Surrey Hills Society, and Shere Museum jointly received an award from the Surrey Industry History Group (SIHG).  This award which is presented annually to an important local project was received as a result of the Tales and Trails of the Tillingbourne project.  Whilst there were many participants and partners in this project, the Society and the Museum were deemed to have been lead volunteer groups and hence suitable recipients of the award. 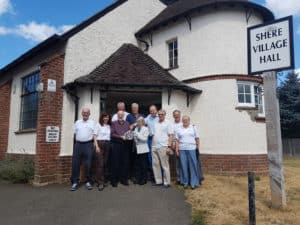 The project had many facets including the creation of character puppets, life stories of the characters, involvement of Yvonne Arnaud Youth Theatre and local schools, etc.  Especially mentioned at the award ceremony was the production of walks leaflets covering each of the Tillingbourne villages and their industrial past.  These leaflets which are available from the Society and Shere Museum have been well received by the public and have introduced a new audience to the fascinating history of the area.

In a small celebration event at Shere Village Hall, a plaque was presented to Christine Howard (Chairman of Surrey Hills Society) and Handa Bray (Patron of Shere Museum) by Jan Spencer (Editor of the SIHG Newsletter).  In due course, this plaque will be mounted close to the Tales of the Tillingbourne display in a new gallery within Shere Museum that was created specifically as part of the project.  SIHG also made donations to both organisations which were very gratefully received.

The Tales and Trails of the Tillingbourne project was funded by a Heritage Lottery Fund Grant.  Further information may be found at:
https://www.surreyhillssociety.org/visit-to-shere-museum-to-learn-more-about-the-tales-of-the-tillingbourne-hlf-project/
and on its own web site at:
https://www.tillingbournetales.co.uk/