Visit and Tour of Kenley Airfield on 21st October 2021 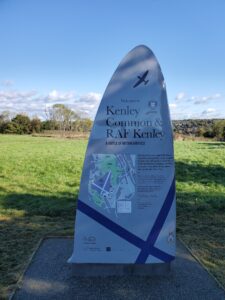 e met up at the War Memorial on the airfield and were guided around by Linda who had a plethora of images taken of the airfield over the decades. She was ably assisted by Alan, Tony and Neil who were all very knowledgeable about the history of the site and each had their expertise in differing areas.

The airfield was heavily involved in the Battle of Britain. 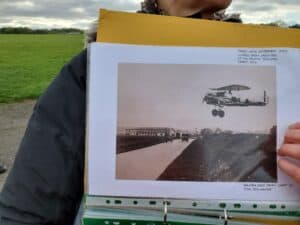 Douglas Bader was based at Kenley and is famous for losing both his legs in a plane crash but he went back to fly many successful missions.

We were shown the E shaped blast pens which were designed and built to deflect the blast of German bombs away from the aircraft, and some of these are still intact from when they were originally built.

One of the most terrible onslaughts at the airfield was at lunchtime on Sunday 18th August 1940 when 9 low flying German planes attacked the airfield. There was total devastation but 4 of the attacking planes were brought down, 2 crashed and the other 3 were badly damaged.

Kenley is identified by English Heritage as “The most complete fighter airfield associated with the Battle of Britain to have survived”.

The airfield is now used by gliders for enjoyment and also for training. 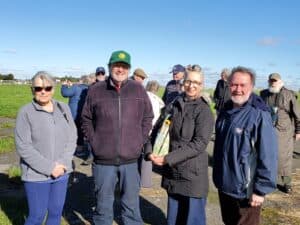 We are organising a return visit next year to include refreshments in the RAFA.