The Society works in partnership with an increasing number of related charities and organisations. One of these is the National Trust and this particular initiative was with the NT Surrey Hills office.

Way back in 2015 we decided to raise funds to support an initiative by the then Leith Hill ranger, Ruby Cole, who came up with the idea of providing a Victorian water fountain and cattle trough to be sited near to the Tower. There are many visitors to Leith Hill, whether on foot, cycling or horse-riding, not to mention our four-legged friends – they can now all benefit from fresh running water if they need it. 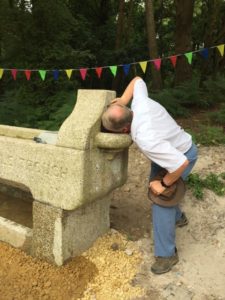 We were able to donate a cheque for £1,000 to them to add to the funds that Ruby herself had raised, as well as other charities. Some of our funds were raised by our members sponsoring two cyclists (my sons!) taking part in the Ride London annual cycling event.

The time lapse came with the need to actually find an original trough from the Metropolitan Drinking Fountain Trust that had been decommissioned, then refurbished, modernised, transported to Leith Hill and connected to the water supply. But we got there in the end and a group of about 30 met in view of the Tower on 13 July to launch the water fountain, which had come from Roehampton Vale. NT volunteers had given their time to bring this all together with the NT office, as well as baking delicious cakes and providing us with refreshments. Thanks to Nicky Scott, Ranger for Leith Hill, and her team for hosting the event. 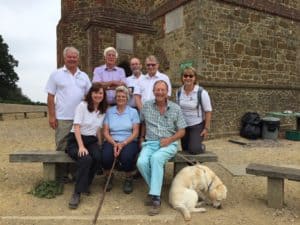 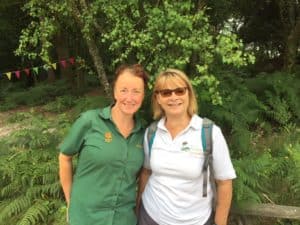