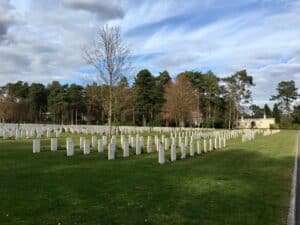 Join us for a guided tour of this beautiful military cemetery maintained by the Commonwealth War Graves Commission. You will hear about the history and ethos of the cemetery and learn about the extraordinary stories of some of the men who gave their lives for their country.

With over 5,000 Commonwealth and almost 800 war graves of other nationalities, Brookwood Military Cemetery is the largest CWGC war cemetery in the United Kingdom. The military cemetery was established as the First World War drew to a close and then extended for the burial of Second World War service personnel. This site shares many of its architectural and horticultural features with CWGC sites elsewhere including in France and Belgium.

The Cemetery is beautifully maintained with abundant plantings and is a site of peace and tranquility. Those buried or commemorated represent all branches of service and all six of the CWGC’s member governments: Australia, Canada, India, New Zealand, South Africa and the United Kingdom. There are also plots of Belgian, Czechoslovakian, French, German, Italian, and Polish war graves.

Two memorials commemorate Commonwealth service personnel who died during the world wars and have no known grave. The Brookwood 1914-1918 Memorial records the names of over 260 who died in the United Kingdom during the First World War but whose graves could not be found. The Brookwood 1939-1945 Memorial commemorates more than 3,400 men and women of Commonwealth land forces who died at sea, in raids on occupied Europe, or while on service outside the main theatres of war. Among those honoured on this memorial are special agents who lost their lives while operating in enemy territory.

We will have a guided tour with experienced CWGC guides, who have an in-depth knowledge of this very special place and the stories of the men and women commemorated here.

The cemetery grounds are flat with well maintained paths and are therefore accessible and suitable for those with mobility issues.

This event is not designed for children and dogs are not allowed into the Cemetery.

There are no toilets on site.

Please wear appropriate footware and dress according to weather conditions.

There is an optional lunch afterwards at the White Hart on Pirbright Green – please make your own booking.

By continuing and making a booking you confirm that you have read, understood, and agree to the Terms & Conditions specified in our Cancellation Policy and Responsibility Statement, both of which can be viewed by clicking here

Bookings are closed for this event.