What does it mean to be High Sheriff? Talks by his Hon Christopher Critchlow DL and Sally Varah MBE DL with tea and cakes 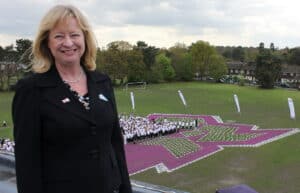 At the kind invitation of Cllr, Helyn Clack, Chair of Surrey County Council, the Society has arranged a very special afternoon at Woodhatch Place in Reigate where SCC now have their headquarters. 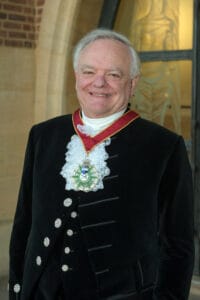 His Honour Christopher Critchlow DL, the current High Sheriff of Surrey will give a talk on ‘The Role of the High Sheriff in the 21st Century.’ The High Sheriff’s theme for 2022-23 is AGAINST ABUSE, FOR RECOVERY.

After 12 years sitting as a Recorder, (a part-time judge), Christopher Critchlow became a Circuit Judge in 2000, sitting in Crown and County Courts in Berkshire and Surrey before becoming Resident Judge of Guildford Crown Court in 2008. He was appointed the Honorary Recorder of Guildford and retired in 2016. 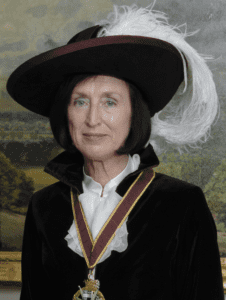 Sally Varah MBE, DL was High Sheriff of Surrey in 2008-09. Sally will talk about ‘Connecting across communities to transform lives.

Today – in one strand of her life – she chairs the Michael Varah Memorial Fund (MVMF).

This small charity was set up in 2007 following the sudden death of her husband, Michael Varah (a former Chief Probation Officer in Surrey) by their children, Kate and James. The MVMF works in partnership with other like-minded organisations to give individuals, who may have been affected by crime (at many different levels), opportunities to rebuild and transform their lives.

MVMF have funded the Watts Gallery Trust artist workshops at HMP Send for 11 years – its single longest funding partnership – and supports the Send artists with their annual ‘Our Time’ exhibition inside the prison. 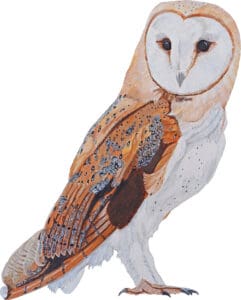 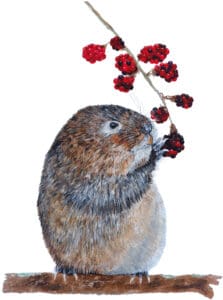 Last year the Society commissioned one of the participants in the Our Time programme to create the beautifully detailed and widely acclaimed Making Space for Nature Illustrations for use in publicity material across the Surrey Hills.

Helyn Clack will also speak briefly on her role as Chair of SCC and the importance of the Surrey Hills in fulfilling the aims and ambitions of the Council. Helyn is responsible for and is one of 81 directly elected County Councillors in Surrey, and one of 47 Councillors belonging to the majority Conservative Party group. As Chair of SCC, Helyn is the Civic and Ceremonial leader of the authority.

After the talks there will be an opportunity to meet the Speakers. Included in the price of your ticket will be tea and coffee and delicious locally sourced cakes from Chalk Hills Bakery. 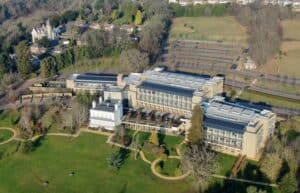 Woodhatch Place is an extremely interesting venue in its own right.

Tea will be served looking out over the charming grounds with excellent views to the South of Reigate. Woodhatch Lodge, the original house is believed to have been built in the late eighteenth century, although the exact date of construction is unknown. It remained a private house set in private gardens and wooded grounds until the 1930s. In 1996 Canon secured planning permission to demolish the mid-twentieth century offices that were built before the 2nd World War and the Victorian wings of the house, restoring the original Georgian part of the house and building a large new office building to the north and east of the house. The new building was formally opened by Prince Philip, Duke of Edinburgh, on 27 April 2000. It was acquired by SCC from Canon in 2020 after the Council moved out of County Hall in Kingston.

This event is accessible for members with mobility challenges.

This event is not suitable for dogs.

By continuing and making a booking you confirm that you have read, understood, and agree to the Terms & Conditions specified in our Cancellation Policy and Responsibility Statement, both of which can be viewed by clicking here

Bookings are closed for this event.